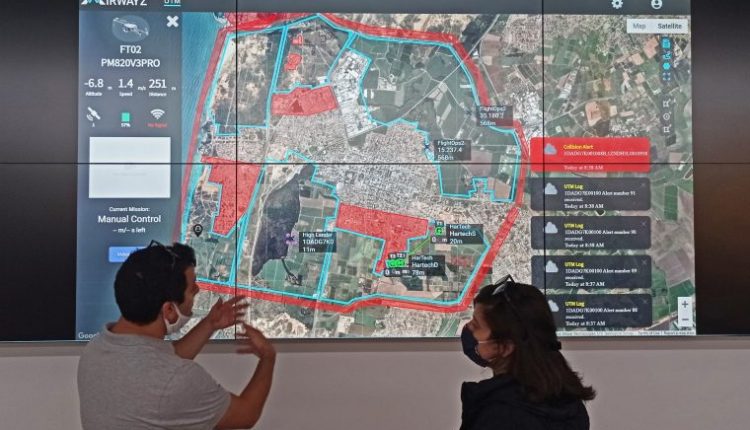 In a bid to realise the future of autonomous airborne delivery, flight system and Unmanned Traffic Management (UTM) specialist Airwayz is taking part in a two-year pilot program that will see drone delivery tested above and beyond any other scheme of its kind. In a world-first, drone fleets from multiple delivery companies are operating in Hadera, just north of Tel Aviv, to validate the safe and efficient integration of drone deliveries in urban environments.

Eyal Zor, CEO and Co-Founder of Airwayz, comments, “Drone delivery has the potential to dramatically increase the safety, speed and efficiency of transport systems across the globe. However, so far, we’ve only seen these types of pilot schemes test drones moving back and forth across a corridor of airspace. This restricts the number of drones that can work in an area and risks whole operations being abandoned if any part of the corridor becomes inoperable mid-mission. This way of working in corridors is simply not practical for the technology to scale-up for commercial use. This pilot scheme will demonstrate how multiple fleets of drones can operate, reacting safely to real-time situations, whilst also maximising delivery efficiency for a commercially-viable solution to drone delivery.”

The pilot program, organised by the Israeli Innovation Authority in collaboration with the Ministry of Transport and the Prime Minister’s Office, began in March 2020, but sees drone flight tests starting for the first time this month. Five separate delivery companies are using their own differing USS (UAS Service System) in the pilot, all of which are managed by Airwayz UTM, which is uniquely able to manage fully autonomous operation across multiple drones with the use of AI (Artificial Intelligence) technology. This allows the drones to operate in a mesh network rather than along a corridor.

Airwayz’ unrivalled flight system and UTM platforms feature AI functions such as advanced mission planning, remote control and multiple autonomous flight modes, which are integrated with a cloud-based network and decentralized swarm technology. The proprietary technology allows Airwayz to share flight information and enable operational coordination for fleets of drones performing various missions so that wide-ranging scenarios can be tested in the pilot.

“Airwayz technology has been designed to enable drone fleet management in the real-world. For instance, we can ensure police stations are out-of-bounds, and there’s no drones flying over schools during school hours, or we can quickly close-off airspace if there’s been an accident to keep it private. And we can do all that safely, autonomously and efficiently. That’s the only way the industry becomes commercially viable,” says Zor, adding: “As such, we’re thrilled to be a part of this pilot so we can showcase the benefits to the world. It will demonstrate how much more drones can achieve, not only in the delivery sector, but also in utilities, gas, oil, and security sectors supporting mapping, inspections and surveillance applications.”

Dr. Ami Appelbaum, Chairman of the Israel Innovation Authority and Chief Scientist at the Israeli Ministry of Economy and Industry, adds: “Operating drones in a managed urban airspace is one of the most significant challenges prior to establishing regulation and integration of autonomous drones in Israel’s airspace. Implementation of this pilot program, while demonstrating the operation of various drones by a number of different operators in the same airspace, marks the beginning of a new age in Israel’s smart transportation. From delivery of medicines, tests, and medical equipment, on to agricultural spraying and postal services, or food delivery to the customer’s home, this constitutes a revolution in transportation as we know it. Together with our different partners, the acceleration of the ecosystem will allow Israel to lead the new age on a global level.”